Clinton Goes All Out Against Trump

With less than a week left before the California Primary, the last primary before the party’s nominate their candidate, Clinton has gone full speed ahead against Trump. Her recent attack ads have not been against Bernie Sanders, who is ahead of her in the polls, but against the presumptive Republican nominee. Clinton’s tactic is to […]

What We Can Learn From Trump in California

Throughout Donald Trump’s entire campaign, there has always been a large group that strongly and staunchly oppose this candidate. There are Super PAC’s that sprung up, independent of other candidates, who create attack ads and spread awareness for why he should be stopped. John Oliver, the comedian journalist, spent an entire show and used his […] 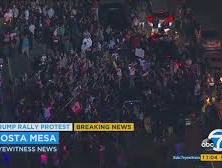 If you are living under a rock, then you probably missed some huge news from last night. After a rally in Costa Mesa, anti-Trump volunteers lost their minds. For some time now, there have been “peaceful” protesters attending Trump rallies. In a room full of avid Trump supporters, they begin to scream how Trump is […]