Earlier this week, when the media asked Donald Trump’s campaign director, Paul Manafort, if the campaign was worried about different talks that Trump may not be the nominee after all, he responded with total confidence that he was not, because this would be a “Trump convention.” This could actually not be more true. This Republican […] 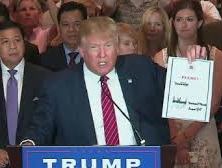 If you remember back to early in the primary, the Republican National Committee had the dense pool of primary candidates sign a pledge. The pledge, once signed, promised that the candidate would not run as an Independent if they lost the nomination, and would support whichever nominee won. Really, it is as though the RNC […]