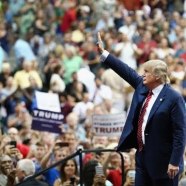 Posted by Elephant News on December 5, 2016 in Uncategorized | Leave a comment

At the end of the day, the president’s job is to lead the American people. And how the president leads is often congruent with how he communicates to the people. When the president talks, the people-most of the time- listen.

Which is why there are certain ways president’s communicate that go down in history. FDR’s “fireside chats” are a huge part of his legacy. His ability to connect with the American people with this new technology was a defining part of his presidency. It also was a defining part of his popularity. Abraham Lincoln’s writing, with speeches like the Gettysburg Address and the Emancipation Proclamation, were also a cornerstone to his presidency. John F. Kennedy and TV are also synonymous. President’s find their way of communicating, and if they do so effectively, it becomes an important part of their leadership.

So, when looking at President-elect Donald Trump’s victory, it is no surprise that communication is a huge part of his connection with voters. His two biggest means of communication, were huge campaign rallies, and social media. Both are means that have not been adopted in nearly the same magnitude as Trump. And for Trump, it is very clear in both situations that these are his own words, his own thoughts, and his own opinions, which many times were controversial. But the difference for him is that he did not care, he continued to be himself, and voters liked him for it.

Trump’s giant campaign rallies very much stemmed from his already celebrity status. Instead of campaigning the usual way by going to high school auditoriums or another local venue, Trump help these pump up, high energy rallies that were more like a high school pep rally turned into a rock concert. By the time Trump came out to the stage, there was so much excitement from the thousands in the crowd that it was more like a musician taking the stage than a politician. Once he got on the stage, he would speak with no teleprompter, and freely go on for an hour about whatever it was he pleased. Trump clearly knew how to work a crowd, and the crowd responded actively. The size of the Trump rallies, which people would late in line for hours for, were a detail political analysts now say was widely overlooked when predicting who could win the election. Trump bypassed his staff, bypassed a carefully scripted speech, and instead, directly connected with the thousands of people in his audience. Those in the audience saw the politician for who he was, and he gained their loyalty through this means of communication. In contrast, Clinton had her teleprompter and her perfectly contrived speech to hit the messages she wanted to convey. These speeches seemed more artificial, more crafted, and less genuine. A team that works on a speech can make sure it says the right thing, but it does delude the candidate’s actual voice in a way, and voters can feel that.

Second, you have social media. Most notoriously, you have Twitter. Trump has used twitter and social media different that any president before. In fact, he uses it so much, and in such an unfiltered way, that there are many critics of his use and a call for him to suspend his account now that he is president. Trump has used twitter so many times, and at all hours of the day, to voice strong opinions (think the gold star family controversy) and to make major campaign announcements. Instead of issuing press releases or formal statements like most candidates, Trump went straight to the American people though social media. And, again, all of his words were clearly his own. Unlike Clinton, who had a whole team to contrive tweets, it seemed like Trump would grab his phone and say what was on his mind. To the political world of consultants and experts, this was again totally shocking. But based on the results, it worked. Millions of Americans are on social media for most hours of the day. Instead of receiving news through the filter of a journalist or a commentator, Trump was able to connect directly to his voters, with hashtag no filter. He seemed genuine, and for most Americans this was a breath of fresh air compared to the usual political speech that is so on script, so politically correct, it seems stale.

And while both of these tactics worked while Trump was a candidate, it looks like he will continue to do them as he heads into his presidency. Trump has made most important announcements via Twitter, and still makes his opinions known via Twitter (think the early morning tweet about the American flag). He also is going around on a Thank You tour, heading first to Cincinnati, which seems more of just a reason to keep up the rallies and the enthusiasm from his base. Also, as a way for him to simply communicate with his base.

Trump has been very vocal against the mainstream media, and the way he communicates allows him to bypass it. His huge campaign rallies and his direct tweets differ him from most candidates, and play a big role in his success as a candidate. Trump’s election is historic, and was missed by many political experts. And these two methods, that were so different from Hillary Clinton, are a big factor in his success as a candidate, and will most likely, like former presidents, be a cornerstone in his legacy.