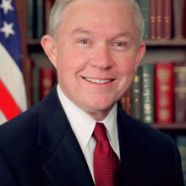 Posted by Elephant News on November 18, 2016 in Uncategorized | Leave a comment

After days of speculation over who President-elect Donald Trump would nominate for his administration positions, one has been confirmed. Trump has offered the position of Attorney General to Senator Jeff Sessions. This position comes as a bit of surprise, as it was thought it would be offered to Governor Chris Christie or Mayor Rudy Giuliani.

Trump’s transition to the White House comes as a surprise for most politicians, as the polls showed and everyone thought right now we would be watching Clinton’s transition happen. Clinton had her transition team in place before Election Day, putting the people into place she wanted to serve in her administration-that’s how sure she was she would be elected. And it made sense to political consultants who were sure Trump would not win.
Which may be part of the reason why Trump will offer the most prestigious positions to those who were most loyal to him. Sessions was the first senator, and the first well-known politician to come out in support for Donald Trump. As other GOP politicians flocked to Senator Marco Rubio or Senator Ted Cruz, Sessions’s support was a big deal, and put him on the national stage.
Sessions served as Attorney General for the southern part of Alabama back in the 80’s, but did not proceed to a judge because of supposed racially charged comments. Given Trump’s campaign history, and the stories presented by the media over his own racially charged comment, this nomination will most likely spark a firestorm in Washington, and from those who oppose Donald Trump.
While this offer is not official until Donald Trump himself confirms, it seems like the first decision has been made. And of course, it will be a controversial one.