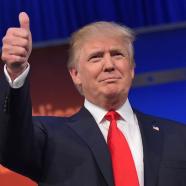 Posted by Elephant News on October 11, 2016 in Uncategorized | Leave a comment

Republican lawmakers are dropping from Republican candidate Donald Trump like flies. But the real question is whether or not they were ever really for Donald Trump in the first place.

The headlines about Paul Ryan invoke a tone of surprise. This, of course, is about the news that Ryan would no longer be campaigning for Trump, and instead, would focus his time on keeping the majority in the House. While he said he endorsed Trump still, this was in so many ways a total pull out from Trump. Sources have also told Politico that he might withdraw his support completely. While it is considered that the leader of Congress would support their party’s candidate, this move is far from politics as usual. But really, Trump’s whole race has been exactly that- a campaign against the Washington elite, and breaking the status quo. Therefore, those who are the status quo will obviously be against Donald Trump.

Really, the long list of Republican candidates pulling their support from Trump never fully supported him in the first place. Not one person on the list came out with a glowing endorsement early in the race. Politicians like Senator McCain and Senator Thune had other candidates in mind. The Bush family was obviously never going to throw their weight behind Trump. The list of these types of politicians is long. It seems like instead of revoking their support, they have just found an excuse to publicly no longer have to say they support their party’s candidate. While it was expected that because of their allegiance to their party, and because of comments made from Reince Priebus about supporting the party’s nominee if a politician was looking to run in the future, that many GOP members would support Trump fully out of loyalty. They did that. But the difference is that now, they have an excuse to not support him that excuses abandoning the party.

A reporter talked to former Mayor Rudy Giuliani as he left Trump Tower. He seemed unfazed by the drop outs. And he has a point. Trump represents the people who have been tired of Republican Party politicians in Washington for years. He represents the people who believe the party has abandoned them. So no matter which high profile says they no longer support Trump, it will not matter. If Trump’s voters wanted someone who represented the party establishment, they had a very long list during the Republican primary. But in overwhelming, historical numbers, these Republicans instead came out and voted for Donald Trump. There is a divide here that is almost unreconcilable. Party leaders represent what they think the Republican voters should want, whereas Trump is actually what they want. And the more the party leaders and mainstream media try to knock down Trump, the more they are convinced that Trump needs to be president. They see a system that is corrupt and rigged, and they see that everything will remain like that unless Trump is the next president. They also believe that America is doomed, and the only one who can save the country is Trump. Because of these reasons, no matter what Ryan or any other leader says, the Trump supporters will remain loyal to their choice.

And even if Trump does lose this election and Hillary wins, the Republican Party cannot expect everything to just go back to how it used to be. While the 10% of undecided voters makes or breaks a race, the base is still important. And the base seems to be against what the party leaders represent. These election problems will continue to persist unless there are actually some major changes made in Washington, or in the party brand, or whatever it is that the voters want to see. The divide between party leaders and the actual voters continues to grow as the divide between Trump and party leaders grow. And after November 8th, this divide will not magically go away.