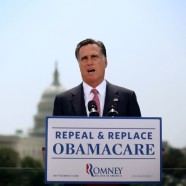 Posted by Elephant News on June 30, 2016 in Uncategorized | Leave a comment

Mitt Romney was one of the first Republican insiders to outwardly speak against Donald Trump. After he lost the general election to President Obama, Romney disappeared from the political scene. A documentary, ‘Mitt,’ premiered, which showed a different side to Romney than many did not see in his campaign. After Obama resumed his office, there was a lot of could have been, should have been conversations. Romney seemed like he would have genuinely been a good president, and the kind of moderate politician that the public says they want.

And last year, it seemed like he would take another stab at it. Rumor has it that he was pushed out by Jeb Bush, who took his potential early donors away from him. He decided to let the vast number of political powerhouses take the lead. This, however, did not go to plan.

Instead, Donald Trump burst onto the political scene. When things got serious, and it seemed like Donald Trump really had a chance, Romney held a press conference. In this press conference, he promised he would not be running for election, but did urge all potential candidates to step forward. As time has gone on, he still has not said explicitly that he would not run, but it seems like his public appearances are definitely keeping him on the media circuit, and his name in the political conversation.

Romney said today that his family greatly wants him to run. If you think about it, this is always a major factor before a politician declares they will seek election. Rand Paul, when asked if he would run last year, said he would first have to consult his family. This is the immediate decoy to not give an answer to the question. Romney saying his family wants him to run, is a clue that he is thinking about it. He said that the family does not like the way the election is going, and his son, in particular, said he has to get in the race.

To many, Romney represents the anti-Trump movement. For those Republicans who want to oppose Trump getting into the White House, Romney seems like the perfect candidate. He said that he hopes a third party candidate “would materialize,” but is not sure how realistic that would be.

It seems like though, with the entire situation and the opposition of many party leaders to Trump and the convention, that a third party run will happen. And, from Romney mentioning his family’s urgency for his run, it seems like it might be Mitt Romney.