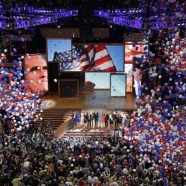 Posted by Elephant News on June 10, 2016 in Uncategorized | Leave a comment

A year ago, when Donald Trump first announced he was running for president, there was more laughter than there was fear. In a sea of 17 candidates who served as governors, GOP insiders, or senators, surely one of the big names would beat out the business billionaire. But as the summer led to the fall, Trump’s poll numbers increased. This was still okay, because there has not been an actual primary or caucus night yet, so polls could be written off easily as mathematically incorrect and hypothetical.

Then, Iowa happened. Trump came in a close second. But still, he had not won. This increased hopes. But New Hampshire was a different story. Maybe this was a fluke? Then came South Carolina, and the rest was history. The real deal sealer was Florida, where we saw Senator Marco Rubio drop out. He was the GOP establishment favorite, and represented what the GOP “should be.” Sadly, the reality of the situation is that while these #nevertrump enthusiasts are determined to derail Trump, the writing is on the wall.
Trump’s campaign has already made history. He received more votes than any other Republican candidate in history. Furthermore, Trump has the magic number of delegates he needs to secure the nomination. And you know that he was not schmoozing these delegates with promises and bribes. Frankly, in an environment where the party and the media did everything in their power to stop Trump from being the clear frontrunner, he won. He won against such huge odds. But still, the GOP cannot let go.
Bill Kristol wrote an open letter for the Weekly Standard where he begs Mitt Romney to run. He writes that Romney is being humble, and calling on other politicians to run for office. But Kristol says he is the one for the job. He writes, “It is a credit to your modesty and sense of decency that you demurred and instead tried to persuade others to run.”
The problem with Kristol’s argument, however, is that Romney already ran and he lost. While many would argue it was not “his time,” we can expect that even if Romney did run right now against Trump, he would lose. Trump won hundreds of thousands of more votes than Romney-the people have already spoken.
And now, Romney held a conference in Utah with political donors and potential anti-Trump candidates. While they promise it is simply a conference, we can only expect there were a lot of talks of how to get Trump off the ticket, and who would be the best person to replace him. What we see here, is a huge disconnect between what the leaders of the party want, and what the people of the party want.
The writing, however, has been on the walls for years. The politicians in the GOP think they know what their voters want to vote for, and continue to ignore the issues they actually care about. While the GOP has focused on the economy, they have neglected immigration. Rubio learned to hard way what would happen if a politician mishandled that issue. So Trump came in and in a very loud and clear voice told the GOP voters exactly what they wanted to hear: he promised to finally fix the broken system in a big way. And the list, from here, goes on and on. Trump has come in and directly addressed issues GOP party leaders have put under the rugs for years.
The fact of the matter is that the GOP has changed. Since the Tea Party movement began, the change has been inevitable. And guess what? It looks like there will be the same sort of change in the Democratic Party in the next few years. Voters are tired of party leaders telling them what they should want, instead of listening to what they actually want. Trump has done this more than any former GOP candidate, and definitely more than Romney. And the result is in his voter numbers. But instead of accepting Trump as their candidate, these GOP insiders, like Romney and other politicians, refuse to accept the reality.
The people have spoken. It is time for everyone to get behind Trump as the presumptive nominee. He followed every rule, and he won. If these GOP leaders want to try and change the situation, they should try again in four years. A contested convention would mean the end of the GOP, and a third party run would mean Clinton’s victory. The race is over, and Trump won.