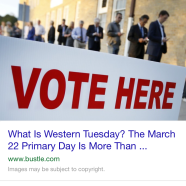 Posted by Elephant News on March 23, 2016 in Uncategorized | Leave a comment

Now that the original shock factor of people actually voting for a candidate has worn off, the excitement from each state result has also died down a bit. And what we have seen, more than anything, is that it is not over until it is over. Tuesday’s have never been more exciting and less exciting all at once. Yesterday, Cruz took Utah while Trump took Arizona. From last Tuesday, Trump took Florida while Cruz took Missouri, and Kasich won his home state of Ohio. What can we learn from this? It is not over until it is over.

Trump still holds hat first place spot, but it is not like he is sweeping every state. Cruz is confidently holding that second place spot, and each round of primaries shows his staying power with a few more wins. He has the powerful state of Texas on his side, just as Trump has Florida on his. No candidate at this point has the delegates they need to secure the nomination, and from the way the RNC is talking, that may not even matter come July.

There was such frenzy when this race first started, and the frenzy seems to have subsided a bit for the real fight to start. While it seems like it is the world against Trump and his supporters, you can bet the business mogul will not let this stop him. Just as it seems Cruz is gaining momentum, scoring the Jeb Bush endorsement today. Both campaigns have their eyes on the prize, and it looks like voters are feeling the exact same way. There is no clear winner at this point in the race, and if anything, it seems like the race is just getting started. Since Iowa, much has changed, but the real fight is starting between Cruz and Trump. Once best friends on the campaign trail, they now seem to be head to head as they promise undecided voters they will be the candidate who is anti establishment, and will restore prosperity in America.