Home » Uncategorized » Trump Against the Pope 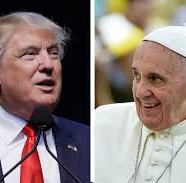 Trump Against the Pope

Posted by Elephant News on February 19, 2016 in Uncategorized | Leave a comment

Donald Trump has proven one thing this election: he is afraid of nobody. Straight out of the gate, he said statements that caused jaws to drop. He went up against the media, and more shockingly, Fox News. The Republican mecca, Trump did not care that they were holding the final debate before the Iowa Caucus, and that many of the voters would be watching to make their final decision of who would have their support. This did not worry him, and he decided his time would be better spent raising money for Veterans.

Whether or not ditching the debate had and effect, a couple of days later Trump got second place. He later said his second place was was because Cruz “stole” Iowa with his dirty campaign tactics. But some, said that this was because he got lazy in Iowa. Others, say it was because he snubbed Fox News. Regardless, Trump vowed to win New Hampshire, and never regretted one of his decisions.

And yesterday, two days before the South Carolina primary, Trump went head to head against Pope Francis. Pope Francis is wildly popular, and is considered by Catholics to be the most holy, spiritual leader of our time. When the Pope traveled to the Mexican-American border, and said in a speech that a leader builds bridges, not walls, Trump immediately fired back.

First, he wrote how Pope Francis will wish he supported Trump if ISIS ever attacks the Vatican:

If and when the Vatican is attacked by ISIS, which as everyone knows is ISIS’s ultimate trophy, I can promise you that the Pope would have only wished and prayed that Donald Trump would have been President because this would not have happened. ISIS would have been eradicated unlike what is happening now with our all talk, no action politicians.

Then, he spoke about Pope Francis’ comment that to build a wall is not Christian:

“For a religious leader to question a person’s faith is disgraceful. I am proud to be a Christian and as President I will not allow Christianity to be consistently attacked and weakened, unlike what is happening now, with our current President. No leader, especially a religious leader, should have the right to question another man’s religion or faith. They are using the Pope as a pawn and they should be ashamed of themselves for doing so, especially when so many lives are involved and when illegal immigration is so rampant.”

Many Conservatives have come to Trump’s defense, showing pictures of the walls surrounding the Vatican. Trump has used this to further push his plan to tackle illegal immigration, and create energy for those who want know amnesty and a wall. He posted pictures today of how it is so much harder to skyscrapers than a wall, and how he is the perfect candidate to do this job.

No matter what, going up agains the Pope is highly controversial. It also reiterates and strengthens the divide that already exists. Those whom already dislike Trump will now just hate him more, and those who stand by Trump will see another example of him holding his word, and keeping the promise that he will build a wall.

Just like Trump went up against Fox News, he has now gone against an even bigger opponent: The Pope. The result of his actions, will be seen after tomorrow’s second primary.