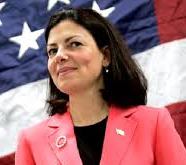 Posted by Elephant News on February 9, 2016 in Uncategorized | Leave a comment

In honor of tomorrow’s first primary, I started to think about Senator Kelly Ayotte from New Hampshire. I quickly checked her social media pages, wondering what she had been doing for the New Hampshire primary. This then surprised me, and I wondered why I had not seen her more in the media. Take Senator Ernst, from Iowa, her name is quite frequently in the headlines, especially ahead that Roast she had months ago. But for Ayotte, I could not remember seeing her name at all.

When I was interning at the Senate Republican Conference three years ago, I remember Ayotte fondly, along with her co-female senators: Senator Murkowski, Senator Fischer, and Senator Collins. All of these women were from “tough” states, with rough terrains and another Democrat senator who was male. I found it interesting that these women all had a common trait, and that was their strength. A key for all these women in the Senate is dedication to a certain issue, and an even bigger dedication to their state. In fact, after a blizzard in DC when the Senate resumed, it was only women senators that showed up for work that day.

Ayotte embodies just that strength, and is a real example of the type of Republican in New Hampshire. She is tough on foreign policy, but more moderate than her colleagues from more extreme Republican states. If you go to her Senate page and look at the legislation she sponsors, there is a common theme: finance, foreign policy/national security, military (including Veteran Affairs).

Heading into the New Hampshire primary tomorrow, you can expect the same type of Republican, and a reason why this state is so important after the Iowa Caucus. Just like Ayotte, the New Hampshire Republican is typically tough on national security with a more hawk like foreign policy, focuses on a strong economy with constant reform, and cares deeply about Veterans and the United States military. Besides these issues, the Republican voter in New Hampshire tends to be more moderate than an Evangelical voter in Iowa. Candidates that have emphasized their foreign policy plan, such as Christie, Kasich, Rubio, and Bush, have spent weeks in New Hampshire with the hope of winning voters for their views on these particular topics. Trump is relying on his business background and his promise to turn the economy around. Cruz is also focused on foreign policy, but has less of a detailed plan, and is a little too far right for the usual New Hampshire voter. Fiorina knows that New Hampshire is her last chance to do well, before she will most likely call it quits.

When predicting tomorrow’s outcome, just look to Senator Ayotte and the type of senator she is for New Hampshire. New Hampshire is the first primary in the nation, and is extremely important in the general election as well. While Ayotte has not officially endorsed a candidate, she is urging all of her followers to get out and vote, emphasizing how important the role of Commander in Chief is to America. Even how she uses that term for the presidency is a detail to how much the military will play a roll in tomorrow’s primary.

Ayotte is a perfect example of New Hampshire values, so who do you think she will choose in the primary? I think I already know.

Like Loading...
← Endorsements Roll in for Marco Rubio What Will Happen if Trump Comes in Second Again? →