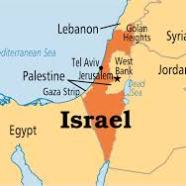 Posted by Elephant News on October 16, 2015 in Uncategorized | Leave a comment

Here is a quick history lesson on why there is always so much violence surrounding Israel and the Gaza Strip:

So from 1949, Israel has been in a civil war with its neighboring Arab countries. Israel’s population soared after it became a state, as holocaust survivors and war refugees sought refuge in their new country. This is why when you here politicians talk about the Iran Deal, it is in reference to Ayatollah Ali Khamenei (Iran’s Supreme Leader) desire to destroy Israel. In fact, Khamenei said in response to what Iran would do if they made a nuclear weapon in 25 years that there would be no need to worry about Israel, as it will no exist “God willing” in 25 years.

Israel, a still new country, is surrounded by neighbors who more or less want the country to no longer exist. Palestinians believe that it is an area that belongs to them, while Israelis believe the exact same. As Israel is the United State’s number one ally in the region, foreign policy with surrounding countries largely has to do with Israel’s safety. This conflict has taken place since Israel joined the United Nations in 1949, and as there is some peace between escalated violence, the tension remains ever prevalent and relevant. When politicians refer to “Stand with Israel,” it is over these issues, and are hugely political with real ramifications for the future of this country.

Like Loading...
← A Quick Breakdown of Why the GOP is Flipping over CNBC Debate Nomination Not Certain for Clinton →