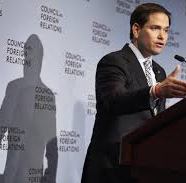 Rubio is captain of a new ship: foreign policy

Posted by Elephant News on October 12, 2015 in Uncategorized | Leave a comment

Three years ago, Marco Rubio caught Republicans attention at the 2012 Republican National Convention. When he spoke on stage, talking about conservative ideals and revitalizing the American dream after the country has lost its way. He spoke about conversations with his Grandfather, who told him about dreams he never was able to realize because he was living in oppressive Cuba. His grandson, on the other hand, could be anything he wanted to be, because he was American. While many may forget what makes this country so special, Rubio will not, and that is because he spent time with his grandfather, and for this reason, fights to make sure that American dreams never become American history.

The Florida senator, young and charismatic, looked like the future for the Republican party. As a son of Cuban immigrants, he had even more of a chance than any other members in the party. As the GOP continues to seek after Hispanic voters, Rubio, because of his nationality, again solved a party problem. The road to 2016 for Rubio looked as though it was paved in gold.

Here, came his first hiccup. Rubio became the champion for an immigration reform bill. The bipartisan legislation was a comprehensive plan that passed with both sides of the aisle’s support with a stand up sit down vote. It was a victory. The problem, however, was that in the bill was a “path to citizenship,” which to the far right sounded like the worst word to ever hear regarding immigration: amnesty. Fox News took up arms against this bill, and it quickly died in the House. Furthermore, Rubio completely abandoned ship. While at this point it really was no secret that Rubio had his eyes on the Oval Office, he wanted to disassociate himself as much as he possibly could from the Fox News’ hated plan. While many do not even know what the plan entails, all they heard was that it was a bad one.

So after this, Rubio lost his steam. He had lost that base that saw him as the immigration reform hero, as he left his crew completely out at sea as he tried to find a new ship to be a captain of. He found one: foreign policy.

Right after Rubio dropped immigration, he started to talk about Iran. Before the Iran Deal or any nuclear talks that are now relevant in today’s media coverage, Rubio got on the senate floor and started to talk about Iran, about its precarious intentions with a nuclear program, and about its relationship with America’s number one ally in a hostile region of the world: Israel. To his credit, Rubio was ahead of the curve when bringing up the tension and the potential conflict with an armed Iran, and his predictions are slowly coming into reality.

Now, Rubio has turned to another potential US foe, which no one is talking about yet: China. Rubio is talking about how this superpower is undermining America’s global power, and his plan to ensure they never get the upper hand. On his campaign page, he has posted his bullet point plan with easy to understand tactics:

The foreign policy talks are so focused on the Middle East, that many politicians are turning a blind eye to China. China, meanwhile, has just successfully produced two “carrier killer” missiles, which would be able to successfully take out any American air defenses in the area, while also shoot nuclear warheads. These missiles are largely out of the media, but could lead to a future arms race.

Rubio is ahead of the other Republican candidates on this issue, and is situating himself in this election as a foreign policy expert. While the more than likely Democrat candidate, Hillary Clinton, is obviously using her time as Secretary of State for validation to enter the White House, Rubio is positioning himself as the only one who has a proven track record to go against hers.

As the primary elections approach, Rubio is building a new ship. Who will get on board?