Home » Uncategorized » No surprise Fiorina supports water boarding, but why was she advising the CIA? 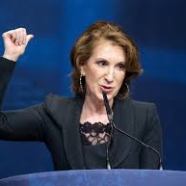 No surprise Fiorina supports water boarding, but why was she advising the CIA?

Posted by Elephant News on September 30, 2015 in Uncategorized | Leave a comment

The Iraq War is still highly controversial in the United States, especially the use of torture in Guantanamo Bay. As presidential candidates form of cohesive foreign policy profile in what is still considered the early part of the election cycle, there is no surprise that Fiorina was asked if she believes George W. Bush’s administrations’ use of water boarding was appropriate. She said yes. In an interview with Yahoo News, Fiorina reiterated that she is an absolute war hawk, and is going to be extremely tough and aggressive when it comes to foreign policy.

From Fiorina’s past two debates, there is no question that Fiorina believes to not speak at all, but just carry a big stick and if necessary use it. She said in the past debate that she would not even speak with President Putin, and instead, would vamp up military bases bordering Russia. Furthermore, she promises to destroy the Iran Deal, and ensure Netanyahu that the US will do absolutely anything and everything for Israel. With this background, there is no surprise really that Fiorina is for water boarding as a torture method to counter terrorism, because she believes it was a tool that would “keep our nation safe” immediately after 9/11.

The Yahoo article reminds everyone of the Senate Intelligence Committee’s investigation of the CIA, and the revelation of some pretty harsh torture mechanisms. The war hawks defended these, while other senators called for making water boarding and other methods totally illegal as it was concluded that no significant information emerged after torture.

Fiorina defended water boarding, stating that there was the proper medical personnel’s supervision. What the article also reveals, is that Fiorina spent time working for the CIA director in 2006, Michael Hayden. Hayden was in charge of the NSA after 9/11,(aka wire tapping). He then hired Fiorina when he became CIA director as someone to give advice on how the CIA can keep its secrets in a culture of transparency.

So with her hawkish style and her closeness to the CIA when all of this went down, there is no surprise she supports water boarding. Really, what everyone should be talking about is why she landed a role at the CIA, working with a group of advisors to: provide advice on how the CIA could maintain its undercover espionage mission in a culture of increasing government leaks and demands for greater public accountability and openness.”

For someone who is running on transparency and not being a former politician, she seems to already have had a big influence and impact on some controversial topics, such as the CIA’s use of torture, and has no doubt secretly dipped her toes in politics way before she decided to run.