Home » Uncategorized » Karl Rove Breaks It Down for GOP 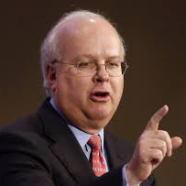 Karl Rove Breaks It Down for GOP

Posted by Elephant News on June 4, 2015 in Uncategorized | Leave a comment

Karl Rove sent out an email blast today, and his first line could not be more accurate:

“This is a time when it’s necessary to read beyond the headlines.”

If you recall, Rove’s ability todo just this is his secret. As George W Bush’s campaign chief strategist, His ability to look beyond media headlines and instead at polls was crucial for Bush winning key purple states such as Ohio. While he had a temporary career slip up during the 2016 election night on Fox News, Rove is undoubtedly good at looking at polls, comparing numbers, and therefore analyzing a way forward for candidates. A long time member of politics, Rove know his stuff. He has helped countless politicians win their elections, and as this upcoming presidential election is more important than ever for the GOP,   his insights are noteworthy.

In a recent op ed for the Wall Street Journal, Rove tittles his piece, “are social issues hurting Republicans.” He continues to give statistics from the May 10th Gallup poll, which shows socially moderate outnumbering socially conservative. Rove says that this comes from Democrats shifting further to the left, and identifying more with being socially liberal than socially moderate. According to the poll, there is also a much bigger number that supports same sex marriage, going from 40% support in 2009 to 60% support in 2015. With only 37% support from Republicans, this is obviously an issue that is hurting the GOP.

As Republicans become more socially moderate and Democrats more socially liberal, the GOP has a chance to envelop Independent and young voters within the party. After all, separation of church and state is one of the key pillars crucial for the formation of America by the Founding Fathers, and one person’s religion should not inhibit them from accepting someone else. If it does, then the government at least should not. If the GOP can adopt modern social acceptance for key issues, combined with their economic platform, they could truly be a popular party and win the 2016 election.