Home » Uncategorized » Lindsey Graham Believes He Has a Chance 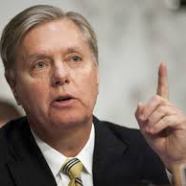 Lindsey Graham Believes He Has a Chance

Posted by Elephant News on June 1, 2015 in Uncategorized | Leave a comment

While it may seem comical that the list for 2016 Republican primary candidates continues to grow, the wild card candidates joining the ranks believe that they whole heatedly have a chance, and are the answer for the Republican candidacy. Last week, Governor George Pataki entered the race. Today, Senator Lindsey Graham joined the race. Graham is running on a ticket that he thinks will make him more favorable than the many other Republican hopefuls, and that is his experience with foreign policy.

Graham gave his speech that announced his candidacy in his hometown of Central, South Carolina. He came right out and said it, addressing the crowd that although they may have known him for a long time, like himself, they may have never expected him to say:

“I’m Lindsey Graham, and I’m running for the President of the United States of America.”

Many people, in fact, did not expect this statement. With all of the major presidential candidates, there was almost no speculation that this senator would seek the Oval Office. With the long list that keeps on growing, Graham is relatively known in the Senate for his aggressive foreign policy. While he makes the occasional Fox News run, he did not give the usual red flags that hint at such a huge endeavor.

Graham continued that the reason he is seeking this office, is because of the tumultuous state of affairs at home and abroad. With the continuous threat of ISIS in Middle East and the growing presence of other superpowers, Graham believes that his experience in the Senate regarding foreign policy will make him the best candidate to be president.

The South Carolina Senator said, “I want to be president to meet our problems head on. Honestly and realistically, for the purpose of solving them, not hiding them or taking political advantage of them.” To many, this may sound like a cry for war. To others, this may sound like a leader who will actually deal with the imminent threat and growing presence of groups who openly state their hatred for the United States. He continued that this group has gained more money, more power, and become more of a threat. As president, he promises he will make them, “small, poor and on the run.”

Basically, Senator Lindsey Graham is running for president with the promise that he will take a strong hand on foreign policy and eliminate ISIS and other terrorist threats. He will uphold the promise to stand with Israel, our ally in the region. He continued that he will fight against other threats, such as Russia and its threat on Ukraine and other countries in the region. If elected, he promises that as Commander in Chief, he will focus on the “mission-to defend America, protect our way of life, and leave he next generation a stronger, safer, better nation than we inherited.”

Would you vote for Graham? If not, he is definitely setting himself up for more foreign involvement, and maybe even a shot at Secretary of State or another appointed office if a Republican president is sworn in.