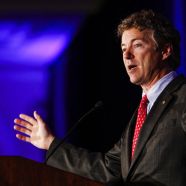 Posted by Elephant News on March 31, 2015 in Uncategorized | Leave a comment

Senator Rand Paul is the son of the very popular libertarian Ron Paul, and it is no surprise that many of his father’s principles are those the senator also stands for. In particular, Senator Paul is on a crusade against the NSA spying on Americans, and the Federal Reserve’s corruption.

With this background, Senator Rand Paul is now very adamant in the need to audit the Federal Reserve. Often times, the government does not hold its own self to the standards it holds the American people to. He wants to pull back the curtain, and see what is really happening in this government branch versus what the administration says is happening. Because of this effort, Paul said that, “the Fed’s cronies have attacked me for months because of our momentum. So I’m going to need a little grassroots muscle from you to send my Audit The Fed bill to President Obama’s desk.”

Government overreach has increased drastically under President Obama, and many of people’s personal liberties are taken away from this growth. The problem with this is that while government gets more power, the people slowly start to lose their own. Rand Paul’s audit of the Fed will give transparency to the American people, which is a common belief of our Founding Fathers and the foundation of American values.