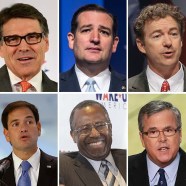 Posted by Elephant News on March 23, 2015 in Uncategorized | Leave a comment

The 2016 presidential race is off and running, and as of right now, Senator Ted Cruz is in first place. The first candidate to officially announce his intentions, Cruz said today at Liberty University that he will be running for the Oval Office. While there is much speculation regarding Hillary Clinton and Jeb Bush, Cruz was the first to announce. Senator Rand Paul has also been moving in that direction, along with Senator Marco Rubio. Governor Chris Christie has also hinted at a run. Without the race or the primaries even starting, the GOP already has a handful of contenders with extremely loyal followers. For the Democrats, the only real candidate is Hillary Clinton. Ironically, with all of these likely candidates, the party is more vulnerable than the Democrat party.

Getting through the primaries to win the parties’ nomination has always been the Achilles Heel for the Republican party. With so many factions within the party, candidates can win one part, but completely ostracize another part. Take Mitt Romney in 2012. He flip flopped so much on his issues in order to pacify certain factions, that Obama took his contradictory stances and ran away with the rest of the campaign. Senator Ted Cruz, who has an extremely loyal following, will win the votes of far right conservatives and Fox News, but will definitely not win those voters who are on the fence. He has gained a lot of traction in the Senate from standing strong on certain issues he believed in, but unfortunately, that does not translate to a national campaign.

The problem with the Republican party is that these factions have no desire for compromise. While it is good to stand firm in your beliefs, a bipartisan government is what we have in America, and it ends up hurting the party. While the Democrats focus on the long term goal, which is winning the White House, Republicans are so focused on their own agenda that candidates barely get out of the primaries before they start the real battle. By battling internally, there is little strength left and low ammunition before the GOP candidate can take on the Democrat candidate. It has really been no secret that Senator Cruz planned to run. He came into the Senate running, and has slowly been building grassroots support. What the party needs to remember, however, is that leading in the Senate is different than leading in the White House. While President Obama may have been a start Senator, his leadership in the Oval Office, well, it speaks for itself.

Once the Republican party can form a clear, cohesive message that incorporates all factions, then we can focus on getting new voters, and highlighting our strengths instead of letting our weakness destroy us. The 2016 primaries just got heated, and the race has barely started.